The drying of natural gas was the first process developed for the processing of natural gas with original designs dating to the early 1900’s.  The various glycols became the norm for the achieving of low water dewpoint gas going to the nation’s pipelines. Eventually the standard solvent has become Triethylene Glycol (TEG). Simple TEG drying units typically achieve water dewpoints of 7 lbs/MMSCFD to 11 lbs/MMSCFD and operate robustly, and most often without manned supervision.

Lower dewpoints however are required when the gas is going to be processed sequentially in a gas liquids recovery plant.  Here the typical TEG unit is simply incapable of producing gas sufficiently dry to avoid hydrate formation in the very cold portions of the NGL recovery plant. Most often molecular sieves are used in batch operation to dry plant inlet gas to the very low levels required.  Of course Azota designs and builds these molecular sieve dehydration systems for all of our cryogenic gas plants. However there are other processes that may be considered for very low dewpoint gas plant requirements or for pipeline requirements where the transported gas may reach sub-zero temperatures. Azota has been a leader in the design of low water dewpoint dehydration systems. Some of our capabilities and interests are discussed below. 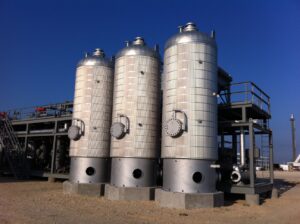 Azota designs and builds TEG units for larger applications and for applications which require very low dewpoints.  Typical one or two gpm field units are usually a catalog item which are readily available either on the used or new market. Our concentration is in 20 gpm and 40 gpm units designed for 50 to 300 MMSCFD gas processing plants. Our standard TEG dehydration units are all capable of reaching less than 7 #/MMSCFD levels and with some modifications may achieve even cryogenic temperature levels.  These plants all include Stahl columns for deep TEG stripping if required since the Stahl stripper uses stripping gas much more efficiently than simply injecting the gas in the reboiler. Of course BTEX removal and recovery is also a standard part of our units.

We would be remiss if we did not brag a bit here.  In 1986 we built our first turboexpander plant which used no molecular sieve system at all but instead used a Stahl stripper type TEG regeneration system which has continued to be our standard for large TEG units. This system worked so well that not only was inlet gas water removed but also the entirety of the contained methanol. A separate methanol recovery tank was profitably installed on the TEG overhead system!

We have proposed the use of low dewpoint recovery systems on gas gathering system so eliminate the costly expense of continuous methanol injection.  The cost/benefit analysis is clear however the application awaits the savvy customer!

Molecular Sieve is the tried and true solution to most deep cryogenic gas plant dehydration applications.  These systems are robust and easily operated either remotely or in manned gas plant applications. We have designed one, two, three and four bed systems. As with all gas processing applications Azota has engineered some attractive energy saving variants on the typical molecular sieve system.

There are several other developments in Azota’s gas dehydration design portfolio that we will be announcing shortly. Our Pressure Swing Adsorption technology, first designed for hydrogen purification and air drying is currently being pilot plant tested for natural gas applications.  Such a system would be heatless, able to reach extremely low (less than 1#/MMSCFD) water dewpoints and useful for wellhead gathering systems.  Look here for further developments!

Need a quick estimate of your TEG sizing?  We have a simple calculator that you can use.

Just insert the gas flow rate (MMSCFD), the water content, (lbs. H2O/MMSCF), pressure and temperature of the gas to be dehydrated and we will do the rest.  If you only know that the gas is saturated the calculator will determine the saturation quantity of water. The calculator determines circulation requirements needed to reach 7 lbs/MMSCF.  We also give you the option of designing an enhanced, low dew point TEG system which will remove water to 2 lbs/MMSCF. Give it a shot for fun!

For general information and inquiries, contact the main office number: